In Memory of Alan Goodban 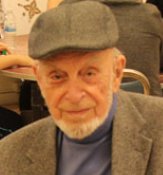 Alan Goodban, beloved husband, father, grandfather and human being, died peacefully on Aug. 11 following trauma from a head injury suffered in a fall. Alan was born in Upland, and received a B.S. and M.S. in Chemistry at the University of California, Berkeley (earlier in life, he dreamed of being a mathematician, but his chosen route was more practical). He joined the United States Marines in 1944 and was commissioned Lieutenant. Alan worked at the US Department of Agriculture as a research scientist and acting administrator for 35 years, during which he received six patents. He retired in 1979 in order to enjoy his many other interests. He traveled extensively throughout the U.S., Canada, Alaska, and to Europe, Morocco, and South America, with Nadine, his beloved wife of 40 years. He was an avid and expert fly fisherman, an excellent golfer, with scores beating his age through his 80’s, and a lifelong outdoorsman. He was generous with his time in community service and as a volunteer board member. He was loved and admired by all who knew him, for his kindness, patience, intelligence, wit, and breadth of knowledge on science, history, and other subjects. Alan and Nadine’s love story is one that she will cherish forever. Other survivors include four loving daughters from his previous marriage (to Mary Jane Christian), Jean (Randy) Bjerke, Nancy (Kenji Hakuta) Goodban, Sue Goodban, and Janet Goodban; and two devoted grandchildren, Sachiko Hakuta and Luis Hakuta. He was preceded in death by his parents, James and Olive Goodban; his sister, Doris, and his brother, Dale. A Celebration of Life was at Aug. 23 at 1:30 p.m., at Congregation B’Nai Israel, 1256 Nebraska St., Vallejo. The service was followed by a potluck reception. About two hundred people came to memorial service. Donations in Alan’s memory can be made to Congregation B’Nai Israel or Hadassah at http://www.bnaisrael.com/donate.html

Where Do You Find Joy in Life? How Do Our Holidays Prepare You For The Year Ahead?

What Element of Contemporary Jewish History Shapes your Identity?

Why is This Seder Different from All Others?